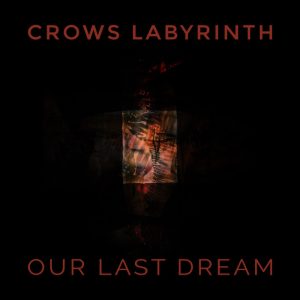 After the release of the second album “All Will Perish”, Crows Labyrinth was invited by the host and producer of Phantom Circuit’s radio show to record a session exclusively for his show. This release is the result of these recordings.

The track is a 16-minute soundscape, made with bass guitar, and improvised in one take. The release also features a single version, which is a 3-minute extract of the session.

“Our Last Dream” is available on Bandcamp as a Pay What You Want release.
Bandcamp link: crowslabyrinth.bandcamp.com/album/our-last-dream

The session premiered on Monday, 20 January 2020 on episode #284 of the Phantom Circuit show. You can listen to the show on Mixcloud:
www.mixcloud.com/phantomcircuit/phantom-circuit-284-featuring-a-session-by-crows-labyrinth/

The beautiful artwork was provided by bassscapes.
Check out his art and follow him on his Twitter page:
twitter.com/bassscapes

Crows Labyrinth is an ambient project, conceived by Theo Tol from the Netherlands. The aim of the project is to create ambient cinematic soundscapes using solely bass guitars and effects processing. The soundscapes preferably have to be created in one take, one improvisation, one flow of sound.

This track may also be interesting for fans of Atrium Carceri, Raison d’Être, Lustmord and Biosphere.

Technical notes:
The session was recorded with a 4-string fretless bass that was modified with a Sustainiac pickup. SooperLooper was used for generating irregular looping delays, inspired by Brian Eno’s installations. Other effects plugins that were used: Native Instrument’s Molekular and Sugar Bytes’ Turnado.

No synthesizers were harmed while creating this release.