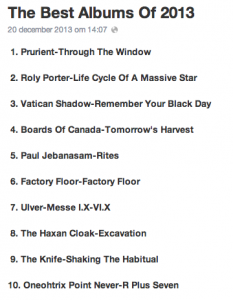 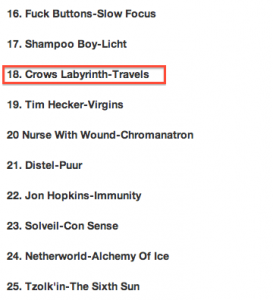 but album “Travels” has appeared on a best-of-2013 list again! This time it was Bob Rusche, DJ at Dutch radio station De Concertzender, who included the “Travels” album in his list of the best 25 albums of the year 2013.

Bob Rusche is the presenter of radio shows X-Rated and X-Ray: two weekly radio shows for electronic, ambient, industrial and avant-garde music that are broadcast every Sunday evening at 9 PM on De Concertzender. A track of the “Travels” album will be aired during this Sunday’s best-of-2013 show.

Listen and buy the “Travels” album on Bandcamp:
http://crowslabyrinth.bandcamp.com/album/travels