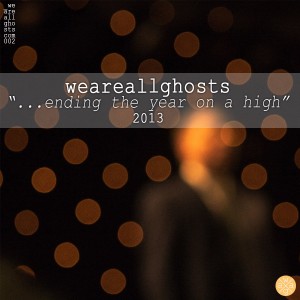 We Are All Ghosts – a small non-commercial netlabel based in Motherwell, Scotland – released its end-of-year compilation album titled “…ending the year on a high 2013” on New Year’s Day. The compilation album features a collaboration track that Crows Labyrinth worked on late last year with English ambient artist Microvolt.

Download the compilation album for free on Bandcamp:
http://weareallghosts.bandcamp.com/album/ending-the-year-on-a-high-2013-waag-com002

The new track is called “We Are All Spacedust Anyway” and was recorded together with fellow ambient artist Microvolt from England. Microvolt provided the ambient landscape and gave Crows Labyrinth an excellent opportunity to deliver improvised fretless bass that matches the soundscape. The end result sounds very organic where the whole is definitely greater than the sum of its parts.

Crows Labyrinth on the new track: “I loved working on this collaboration track very much and keep my options open to work with Microvolt again in the future.“

His albums “Peacedrifts” and “Dissipate” are among Crows Labyrinth’s personal favorites and were among his favorite releases of the year 2013.

Here are some more details about this end-of-year compilation album.

Thomas Mathie, founder of We Are All Ghosts:

When I put out the call for submissions for the end-of-year compilation, I never thought I would receive what I did: tracks from artists like Cousin Silas, Scott Lawlor, and Kevin Lyons – the very backbone of weareallghosts; new creations from Jack Hertz, and Mystified – pillars of the Ambient music community; an inspired remix from Wolfgang Merx of a decidedly creepy yet fun track from Infinite Decay; an equally inspired collaboration between Crows Labyrinth & Microvolt; a new track from Apta alongside new music from Ade Hodges – both rising stars in their own ways; and last but not least a contribution from Row Boat, an artist whose post-rock soundscapes have captivated my ears in 2013;
I could not have asked for more.

Read the full liner notes of the album page on Bandcamp:
http://weareallghosts.bandcamp.com/album/ending-the-year-on-a-high-2013-waag-com002

Visit Crows Labyrinth’s official website and Bandcamp page for more information on his own music and other collaborations.

TAGS > compilation, free download, microvolt, Thomas Mathie, we are all ghosts, we are all spacedust anyway NO COMMENT